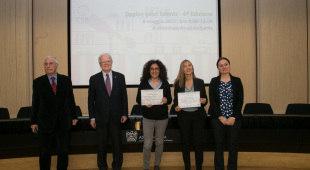 Gender prejudices are still very strong and limit access of women to careers and studies in the STEM (Science, Technology, Engineering and Mathematics) disciplines. This gender gap does not adequately allow for answering the needs of the work place and, in Europe alone, 900,000 work places risk remaining unfilled due to insufficient candidates with the appropriate capabilities, from now to 2020.

This situation on the other hand may prove to be a great opportunity for those young who are preparing to choose their study subjects and this is why; as a company which has always placed great faith in the value of education, we consider it a priority to promote and participate in initiatives which might help the young to find clarity in their future choices, at the same time stimulating the involvement of youngsters in those fields in which they are normally less involved, such as technology.

The fourth Italian edition, the “DEPLOY YOUR TALENTS – Stepping up the STEM agenda for Europe” campaign, has involved 13 businesses and 12 upper school institutes (for a total of 400 students), in a common task for awareness-raising in youngsters on the value of education in technical-scientific matters, and on how a solid STEM (Scienze, Technology, Engineering and Mathematics) foundation can make a difference in finding work and professional development.

In the field of this campaign, the Italian branch of Mitsubishi Electric has met with the two classes of the De Amicis Science high school in Milan. During the first meeting, an engineering colleague of the Mitsubishi Electric Climatization Division presented the company and its organisation to the children and talked of her own study path and successful entry into the work place thanks to her choice of STEM subjects. Furthermore, the children of the two classes were hosted at the Mitsubishi Electric establishment for a visit to the offices, the Climatization Training Centre and to the Factory Automation Demo Room, as well as for a meeting with the Mitsubishi Electric Human Resources Directorate aimed at making the youngsters aware of their most suitable educational choices, combined with the greatest possibility of securing work, in addition to the need also to work on their so called "soft skills".

80% of students involved in the national project have changed their perceptions on the value of a STEM education, while 70% of them have declared to having discovered the occupational potential of technical-scientific studies.